The clarity and detail of readouts almost makes it unfair for the fish. Marked it down a bit because a few reviewers said they had trouble reading bottom at speed and there were a couple reports of losing waypoints due to lockups.

The learning curve can be overwhelming, but once the unit is set up, it's very easy to use. The menus and layouts are more intuitive than the Gen 2 models and the large, high res screens make things super easy to see. A few anglers said it worked just great with the default settings.

After reviewing all of the Lowrance products, I found their customer service and willingness to stand behind their products extraordinary. I marked them down a bit because their support is also known for being slow to respond.

If you're looking for tons of helpful buying advice, check out:

Summary: Like with all Lowrance models, the only difference between the HDS Gen 3 models are their screen sizes. Fishermen are pretty uniform in their feedback that the 7, 9 and 12-inch versions are all great units. The 9-inch version did have a few reports of locking up when loading waypoints.

Honestly, if I were going to buy a Lowrance fish finder, I'd go with the Elite-Ti 7. It seems to be the best mix of being a proven performer, a broad mix of features for anglers of all skill levels, all the great sonar advancements Lowrance is known for. Check out my Lowrance Elite-Ti review for I love it!

But if you want/need the latest and greatest or want the super clarity of StructureScan 3D, you can't go wrong with any HDS.

This version includes the screen shield, which you'll definitely want!

Quick Navigation: This is what you'll learn below
The Full HDS Gen 3 Review
Is it the Best Fish Finder for You?
In Person with the HDS Gen 3
Which Transducer Do I Need?
What Do Other Anglers Think?
The bottom line

Why should I listen to this guy's opinion instead of the 50 other guys writing fish finder reviews?

Let me tell you a story.

When I started researching fish finders, I was overwhelmed with all the choices. I'm brand new to fishing and to all the gear and technology that comes with it. I didn't know Lowrance from Humminbird or Sidevu from structure scan.

So I have that 'new guy' attitude. I started out in the land of information overload, but as I read up on the technology, the brands, the equipment and what real fishermen thought about each fish finder, I picked up on trends and began to see insights not available anywhere else.

Ultimately, there is just one reason to read my reviews:

​Save yourself the hours I've spent researching this model and skip visiting 23 websites and reading hundreds of reviews. Spend 5 minutes on this page and you'll know whether a Lowrance HDS is worth your time or not.

Is it the Best Fish Finder for You?

As discussed above, the HDS Gen 3 fish finders are some of the most technically advanced and well-liked fish finders available on the market today.

Although, they aren't the top of the line for Lowrance, who also has the HDS Carbon which adds HD sonar, another processor, dual channels and more memory.

If you fish for a living - either for sport or light commercial fishing - I don't think you could go wrong with any of the the HDS Gen 3 units.

Or, if your old fish finder gave up the ghost and you want to upgrade to something state of the art, you've in the right place. You won't go wrong.

If you just want a proven performer that will up your game without breaking the bank, HDS fish finders are definitely not for you. As I said above, the Elite-Ti 7 will give you 70% of what the HDS Gen 3 gives you at about one third to one half the cost.

Unlike Garmin, Lowrance doesn't offer a kit to make their units portable, so if you can't install a fish finder to your boat permanently, the HDS units won't work either.

You can still get Lowrance sonar technology in a portable fish finder, but you need to check out their Hook series instead. The Hook version has CHIRP and is a combination fish finder and GPS, while the Hook-x version is a dedicated fish finder with no chartplotting. See the chart below for more info.

In Person with the HDS Gen 3

Setup and Advanced Features (on the water)

Which Transducer Do I Need?

Whether you're replacing an old fish finder or buying one for your first time, one of the most common questions asked is, "which transducer should I buy?"

Simple...you're getting a new fish finder so you can gain capabilities and catch more fish. If you have an old transducer or you buy the wrong one with your new head unit, you won't be able to take maximum advantage of your new unit.

While I was researching, I got totally confused by all the transducer and sonar lingo. If you're like me, you're wondering what capabilities your new transducer should have, so here's a list of what to get if you want to be able to use your HDS Gen 3 to its fullest capacity.

Get the Lowrance TotalScan transducer.​

This guy explains why...ignore the fact that he's talking about a different brand head unit...he does a great job of explaining exactly why you need the TotalScan and what capabilities it gives you.​

What Do Other Anglers Think?

After reviewing 124 reviews on Amazon.com, Bass Pro Shops, Cabela's and the Lowrance site, most fishermen really like their Lowrance HDS Gen 3 fish finders.

There are multiple mentions of finding structure that wasn't mapped and being able to mark individual fish rather than just seeing a big blob on the screen. One even talked of being able to tell exactly in the water column where his target fish were.

I lost count of the number of times I read, "I can't believe how clear the picture is," or, "it's so flexible and customizable - I can get it to display whatever I want."​

And, most importantly, many fishermen said it made their lives so much easier because it puts them right on the fish.​

Reports on losing bottom are mixed. Some said their unit never loses bottom at any speed and others said it loses bottom anywhere above idle.

After reviewing all of the Lowrance models and many fish finders from Garmin and Humminbird as well, this seems to be a common complaint among them all. Transducer placement plays a major role, but so does the physics of moving at high speed over water of varying depths and bottom composition.

As mentioned above, a few reviews of the 9-inch version mentioned the unit locking up when they were loading waypoints.

To see the reviews for yourself, go here: Amazon, Cabela's, Bass Pro. Cabela's and Bass Pro take most of their reviews straight from Lowrance, but they do have a few that anglers have left directly on their sites too.

If you've come this far and you're set on getting a HDS Gen 3, I'd recommend getting the largest screen size you can afford. Just like TVs, I didn't read a single review that said they wished they'd gotten a smaller screen.

If you're looking for a sort of sweet spot in the HDS Gen 3 lineup, I'd say it's the 9-inch version. It's not a huge price jump from the 7-inch, but is significantly cheaper than the 12-inch.

Cheap enough you could probably upgrade to the StructureScan 3D transducer and a map pack and still be less than the 12-inch.

This version includes the screen shield, which you'll definitely want! 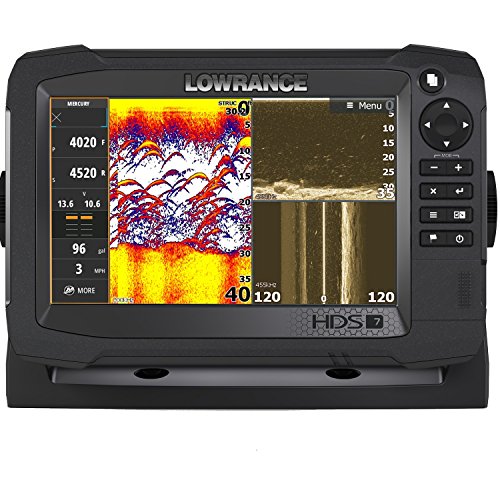 If you're looking for tons of helpful buying advice, check out:

How to Choose Fish Finders for Kayaks

How to Choose the Best Portable Fish Finder

Get Your Guide Now